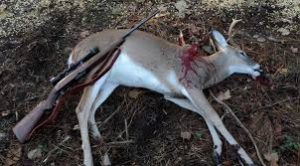 The State of Michigan imposes very steep penalties for unlawfully taking a deer and/or poaching of a deer.  The law concerning the penalty is contained in Michigan Compiled Law (MCL) 324.40118 and MCL 324.40119, and includes the following:

How does DNR make a determination that the deer was unlawfully taken?  Usually they receive a tip of some sort that the deer was allegedly taken.  It could be from a neighbor, another hunter, somebody with an axe to grind, the person who tracked the animal with dogs, etc.  When a call is placed DNR makes a determination if the hunter had a license/tag for a deer in their own name.  They also determine when the license/tag was acquired.  It is not uncommon in these types of an investigation for a hunter to purchase the tag after the deer was taken, which is not permissible, and for a conservation officer to discover the same through a computer database.  The DNR officer will try and make contact with the hunter and collect evidence.  Often the DNR officer can determine the approximate time that the deer was taken by the internal temperature of the deer.  The DNR officer will attempt to interview persons with knowledge about the deer taken, including the hunter.  Sometimes the hunter’s admission is what leads to prosecution.  The admission can be through an interview with a DNR officer.  Sometimes the admission is through other sources such as social media, text messages/emails, or through statements the hunter allegedly made to other persons.  It is important to remember that everyone has constitutional protections, including a 5th Amendment privilege to not make any statements that may incriminate.  A hunter under investigation does not have to volunteer information such as, but not limited to, information contained on a cell phone.  However, in some instances, the prosecution may attempt to obtain a search warrant if it suspects there is evidence of a crime on a cell phone, tablet, or computer.

The DNR officer or prosecutor will decide what, if any, laws were violated.  Sometimes a ticket is issued on the spot.  In other circumstances the hunter receives notification of the alleged offense(s) after the DNR officer consults with a prosecutor.  It is not uncommon for the DNR officer or prosecutor to issue multiple citations for other hunting related offenses along with unlawfully taking a deer (such, but not limited to, illegal baiting, failure to wear hunter’s orange, hunting outside of permissible hours, etc, etc.).

Hunting laws frequently change.  The information in this blog is not intended to be a substitute for consulting with an experienced criminal lawyer.

Make the smart decision and contact attorney Daniel Hilf at 248-792-2590 for all hunting related charges.