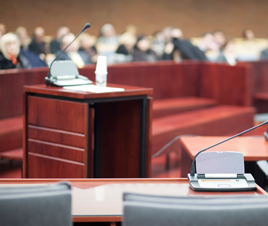 It happened again. You’ve violated your probation for a second time and jail time is looking very possible in your future.

Whether it was a failed drug test, not reporting to your probation officer or being arrested for a new offense, the judge will likely be much less lenient the second time around. So, what should you expect to happen?

According to Lawyers.com, here are some of the consequences that come with violating probation:

END_OF_DOCUMENT_TOKEN_TO_BE_REPLACED

A very common violation of probation allegation in Michigan and elsewhere is for using or testing positive for drugs or alcohol while on probation.  The punishment for drug or alcohol related violation of probation can include one or a combination of any of the following: no sanction; added conditions of probation such as increased drug/alcohol testing, drug treatment, AA/NA meeting attendance, community service, etc.; extending the term of probation; requiring Adult Treatment Court program participation (if the Court has an Adult Treatment Court program); incarceration of various lengths up to the maximum allowable sentence that can be imposed.

Judges differ in philosophy in terms of how they view a positive drug or alcohol test.  Some Judges view a relapse, or relapses, as a part of recovery and may be willing to invest additional resources into the probationer to address the drug and/or alcohol problem.  Other Judges have a no tolerance view of a positive drug or alcohol test, and want their reputation of strictness to deter a probationer, and others, from use.  There are Judges that combine these philosophies and balance rehabilitation with punishment.  A Court usually will eventually give up on a person who repeatedly violates their probation, and will usually choose to incarcerate the person.
There are circumstances in which a person will falsely test positive for drugs.  A positive drug screen is often sent for additional analysis to confirm or negate the original test.  Drug and alcohol testing is viewed as reliable by Courts, and it is often hard to overcome a positive test at a probation violation hearing.  Reasons why someone might wrongfully test positive for drugs or alcohol include: the person tested positive for a valid prescription that he or she was taking; the person ingested a substance that could lead to a false positive such as poppy seeds, vanilla, or mouthwash; there was a human error regarding the testing procedures, etc.  Any error in drug testing should be contested by an experienced criminal defense lawyer, such as Attorney Daniel Hilf.
END_OF_DOCUMENT_TOKEN_TO_BE_REPLACED
Contact Us
Free Phone Consultation (248) 792-2590